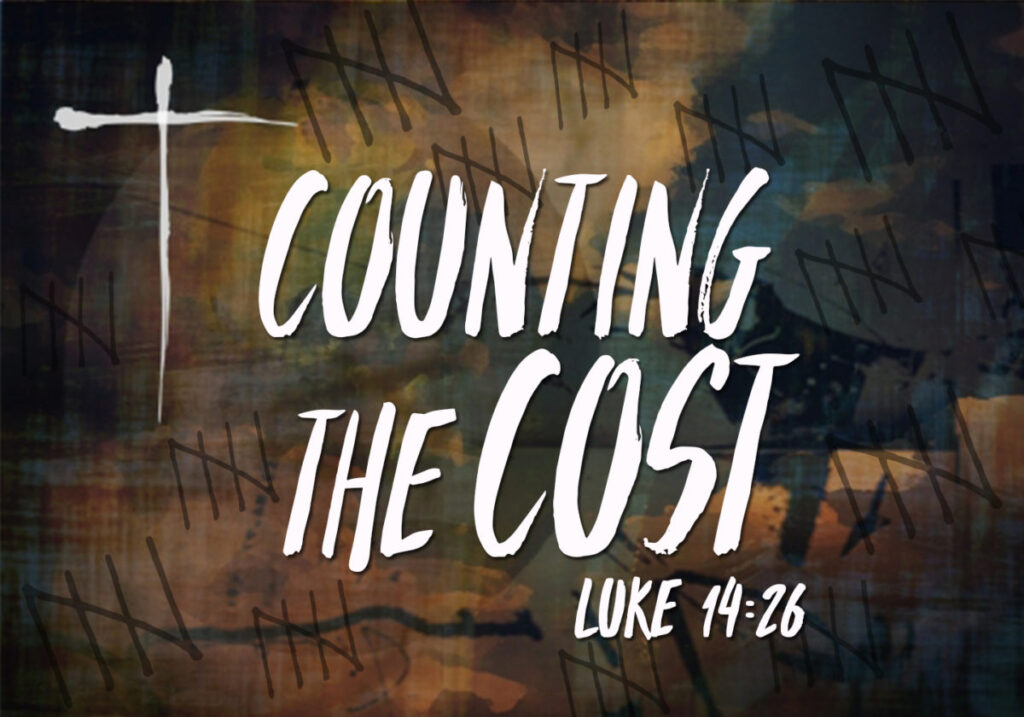 If you are thinking of being a follower of Jesus Christ, He first warns you to count the cost. Being a disciple is no easy journey. Below is a story of a pastor and what is cost him to follow Jesus.

When I Found My Daughter Weeping

“Faithful is he that calleth you, who also will do it.” 1 Thessalonians 5:24

We must be fully persuaded that the ministry we are heading into is indeed the will of God for us. We must also be fully yielded to the Holy Spirit to make certain that we remain as long as, but no longer than, God wills in that ministry he has called us to. When you know that God has indeed called you to that particular ministry, never lose sight of his word, his promises in it to you, no matter what trials come; and they will come. Do make certain that you have your pastor’s blessing: I had mine even though losing our family was a tremendous loss to our little home church, as God had sent out four other families before us and we were the last ones that had children. By God’s grace, at the time of writing, it is now almost ten years since we were sent out and we remain by God’s grace at the same church, which is no small miracle if you knew the condition it was in when we arrived. As a pastor, I had a man leave here to take a church and I did not believe that it was God’s will for him to do so and within two months they had told him to leave, and he had already bought a house!

We were sent to a church that had a terrible, hidden sin that was never dealt with in the ’90s. I was the eight pastor to be called in the fifteen years since the scandalous event brought it almost down. But the root was never dealt with as the rotten fruit evidenced. Believing that God did not call our family 1,200 miles across the country, just to be the next pastor out, I pleaded with God to reveal to me the root sin. He did; now what would I do with the answer to prayer? That was my challenge. Never having pastored before, and being in my mid-30’s at the time and five children, three of which were already in their
teens, what took place once I began to confront the problems was unimaginable and revealed so much evil. My family and I had never seen the depth of darkness on this level, as no one not directly in the crosshairs could. One day I hope to write out in-depth the events of those first three years and then the mighty revealed power of our God after that, but for this project, I’ll need to focus on a moment of that time.

We lived on church property, in the parsonage. My family is literally closer to the ministry with all of its blessings and problems. In the darkest time, in the fall of 2013, we had seen the enemy’s attacks magnify, including personal ones. We could not move as we did not have the funds; the parsonage was and still is, our home. People would drive up to the house, or call, or come into the back of the church frequently during that time, not to be a blessing, but to be a tool of the devil to seek to get us to quit. My wife and children were subjected to the heat of the battle, including even preachers who were, unfortunately,
misunderstanding of where I was standing and what my motives were, to see Christ’s church be rebuilt here because the people that had the reigns of the place for so long saw that I was not going anywhere and that they had lost their influence, so they tried to use their influence to move area preachers to get us to leave. I was accused of many things and was even bribed by a group of preachers to leave the church; I am not joking. I told them that instead why do they not rather make an offering to the church to help us get through this; I was told to see this as my way out. On a particular day, I heard from back
in my office a faint noise coming from another part of the church building. As I walked to discover the origin, once I entered the auditorium, hearing it more pronounced, I realized it was coming from the one classroom in the foyer. As I opened the door to the room, I will never forget what I beheld. It was our youngest daughter, who was then only fifteen, on her knees weeping out loud to our Father in heaven over all the heartaches and pain. She was hurting for me she said and was praying for me. Immediately
floods of thoughts and emotions filled my mind as a father could only do upon seeing his daughter in such emotional pain, including at what point do I leave this place. We embraced, wept together, and prayed together. The Holy Spirit made it clear that we were not to leave and to be still, trusting in the unseen hand.

By God’s grace, we still serve at the same place together, she now almost twenty-two and my secretary! As the events of the remainder of that year unfolded, we SAW God by how he wrapped up all the loose ends of the past of the church and began to breathe his life into it again. Since the very first Sunday of 2014, there has been a moving of God that we could only have seen by Continuing. It was told me by a then stranger-to-me pastor whom God used to bless our family so richly in those following months that most pastors, for various reasons, do not stay long enough in one church to have the blessing of seeing
the fruits of their labors. He is correct. Had I moved away, my wife and children would not have seen the fruitful side of the battles and been left only with the sight of the evils. God is greater than all the forces of hell combined. God IS faithful! You WILL face trials you never dreamed could happen, and it will be alright. Never quit listening to the Holy Spirit, nor wise counsel. My pastor was my best friend and closest ally in that fight, and we talked frequently, and I know he prayed for us. I also, since the time we arrived, made a monthly prayer letter to send out, just as a missionary would because I knew we needed more people praying for us. I am still in that practice today and I have no doubts such monthly reports and prayer requests will be revealed as a key to our standing when it is all said and done.

“Faithful is he that calleth you, who also will do it.”